Beautifully poignant, altruistically sad and brilliantly fresh donned with crisp ideas and a lucid style. Absolutely loved it! The continuous theme of death in many of the stories sets 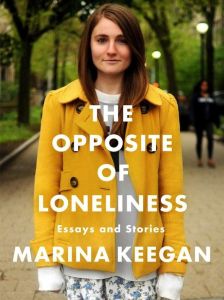 out even more so in the backdrop of her own tragic demise. As Arundhati Roy said in God of Small Things “a sunbeam lent to us too briefly.”  From philosophical musings to generic observations of life, Marina Keegan’s prose and context is a sobering reminder of the magnanimity of philanthropic thought coupled with individualism and the inevitability of finality, of death, seen not as an “end” but as a cessation of life.

“We’re so young. We’re so young. We’re twenty-two years old. We have so much time. There’s this sentiment I sometimes sense, creeping in our collective conscious as we lie alone after a party, or pack up our books when we give in and go out—that it is somehow too late. That others are somehow ahead. More accomplished, more specialized. More on the path to somehow saving the world, somehow creating or inventing or improving. That it’s too late now to BEGIN a beginning and we must settle for continuance, for commencement.”

“The middle of the universe is tonight, is here,
And everything behind is a sunk cost.
—Marina Keegan, from the poem “Bygones”

“We were involved, of course, but not associated.”

“Brian’s death was the clearest and most horrifying example of my terrific obsession with the unattainable. Alive, his biggest flaw was most likely that he liked me. Dead, his perfections were clearer.”

“I remember finding it extremely hard to open presents as a child because the requisite theatricality was too exhausting.”

“my state of mind reminded me of the world’s remarkable capacity to carry on in every place at once.”

“She understood silence the way he understood darkness—running from neither as the sun set and the words ran out.”

“I felt an odd nostalgia for my high school friends and the days when everyone shared the same world of people.”

“My mother always said how amazing it is that things seem so absolute when you’re young. But the sand slides down in chutes until the dune craters are all full. Inevitable, the magazines write, and we shake our heads with somber nostalgia for the grass and its crickets. We always will.”

“I’ve started praying. I’m sure your raging atheism finds this amusing. It’s something about this place. The flowers, the marble, the people who don’t go more than four hours without stretching towards Mecca. I don’t know what God my mind keeps consulting—but I’m hoping it’s one who doesn’t believe in Jihad.”

“It’s like the country is unraveling from the inside.”

“Kyle wondered whose job it was to erase the memories from someone else’s life.”

“A man received an eye transplant and began to see things from the donor’s life. These cameras, he decided, must function exactly like that.”

“I try to remember these months objectively but it’s hard—and around thirty, they started to haunt me.”

“My reaction to his presence was always visceral”

“My eyes hurt from seeing but there was a strange hope in the blue light, and the weeks of darkness drew us toward it like moths.”

“I believe this functioned in the same way as not being able to taste your own saliva or smell your own odor—the car and I were pleasantly immune to each other.”

“The task was strange, like deconstructing a scrapbook, unpeeling all the pictures and whiting out the captions.”

“I worry sometimes that humans are afraid of helping humans. There’s less risk associated with animals, less fear of failure, fear of getting too involved. In war movies, a thousand soldiers can die gruesomely, but when the horse is shot, the audience is heartbroken.”

“Beached whales die on their sides, one eye pressed into the sand, the other facing up and forced to look at the moon, at the orb that pulled the water out from under its fins.”

“There was nothing to be fascinated by, nothing to esteem, nothing to romanticize in this everyday examination of our immutable solipsism.”

“Suddenly and totally, we’re threaded together in a network so terrifyingly colossal that we can finally see our terrifyingly tiny place in it. But we’re all individuals.”

“I was lying in bed the other night wondering whether the Germans created a word for its opposite when I realized that the displeasure derived from the fortune of others is easier to spell. I should have thought to coin its green eyes.”

“I blame the Internet. Its inconsiderate inclusion of everything. Success is transparent and accessible, hanging down where it can tease but not touch us.”

A wonderful, enlightening read that everyone, irrespective of their religion, should get their hands on. Illuminates the 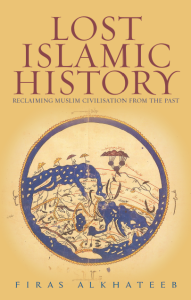 roots of many of current world problems, especially the rapid loss of empathy for our fellow brethren. New World conflicts are very reminiscent of clashes faced by ancient societies, and perhaps we can all learn a thing or two by reading and analyzing the glorious Islamic history. But above all that, the book succeeds in making an excellent point in a few last pages – that of our Muslim identity, and its utmost importance in solidifying our spiritual connection with Islam as basis of reviving the lost spirit of the perfected religion.

Perhaps the only flaw of the book is the lack of maps and diagrams accompanying the text which could have aided my understanding of historic invasions and span of empires even more. For someone who is as geographically challenged as myself, consulting the internet time and time again becomes tedious, especially concerning ancient city names that have now changed.

That being said, it’s a highly recommended book owing to the simplicity of narration which makes it an effortless read.