His art has long surpassed him. The biggest show on the planet commands a universal audience while somewhere in a dark corner of George’s room, inked pages rest silently…waiting to be beckoned, to be shuffled, to be seen and heard, to be shared and enjoyed. But most of all…to be read. George let’s out a sigh.

This was my first brush with a novel about vampires. It is intense, sensual and full of throbbing 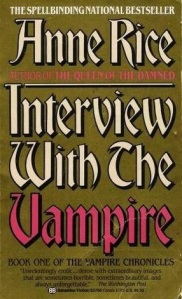 energy that makes each page pulse out of the written word into the most fantastical of fancies. Characterization is full of depth, especially of the Vampire Lestat and Claudia. Louis as a first person narrator vividly describes each and every aspect of his ancient life, including the budding life of New Orleans, the pewter landscape of Eastern Europe and the mystical streets of Paris.

Every detail runs its thorough course and Louis’ eloquence in narrating the horrors and beauty of a life lived so long is just indescribably terrible yet beautiful. His meditations on death, evil and goodness, solitude and loneliness, on his purpose of an eternal life marred by a quest to revive his human nature are replete with profundity and have an ingenuous, unaffected quality about them.

Oh and the Vampire Lestat is perhaps one of the most nefarious and scheming of villains I’ve ever read in a novel. One is gravitated towards him despite his obdurate wickedness. He may be evil incarnate! Yet the fiend is able to rally sympathy of some odd sort, especially towards the end of the novel. All in all, this was a great read and I look forward to watching the film, which I’ve heard does complete justice to the story.

On Goodness and Evil

On the Self and Learning

On Death and Detachment

On the Quest for Reality

My first crime noir was dark, intrepid, and thrilling. Chandler’s world building is quite gripping. I 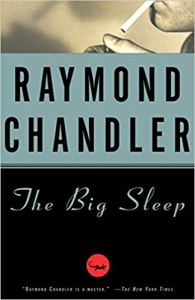 could almost envision the heat-choked greenhouse teeming with orchids, the corners of Geiger’s smut shop draped in the scene of burnt cigars, the long-winding roads and the unabashed, ceaseless rain tapping on glass panes.

The world of Philip Marlowe, a private eye, is full of corrupt men and diseased souls. He tends to treat people with a discreet aloofness which is either a charming virtue or an irredeemable vice, depending on who he is dealing with. The Sternwood sisters, Vivian and Carmen, were so compelling in their moods and coquetry, in their secrets and passions that I found myself gravitated towards them.

And who doesn’t enjoy some ludicrous similes once in a while? But when the goofiness comes to an end, and absurdity starts to become more frequent, you can’t help yourself but feel like punching the author or the character – whoever shows up in your face first. Here’s a compilation of them:

The Most Ridiculous Set of Similes

The Dark Side of Fame

The Abyss of News & Social Media

Perhaps back in the day when this book was published, unusual cases related to mental conditions 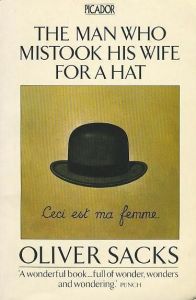 and neuroscience were largely unheard of – which accounts for the immense popularity of this book. Now knowledge, understanding and acceptability regarding such issues has been mainstreamed, primarily through films which did eventually wane my initial excitement of reading the book. However, I did find a myriad of supremely interesting cases in terms of their relevance to fiction and even magical surrealism. It prompted me to make mental notes of unique tics and character traits I may use in my stories and scripts later on. The fascinating case of the Twins, John and Michael, remains embedded in my memory and it is worth reading that particular chapter alone.

That being said, there was also a dire lack of diagrams or explanations for scientific, medical and technical terminologies which might have made it easier to comprehend the beautiful intricacies of a human’s physical, spiritual and mental psyche. I can’t help but think how much more enjoyable the reading experience must have been for the medical community or even for the relatives of those who suffered from such acute mental conditions.

An interesting takeaway from this book has been of the perennial question of nature of reality. Is there an objective reality compounded by multiple subjective realities? Do the Twins in their deeply eccentric and solitary understanding of numbers stand to concoct a reality that is true only to their own existence? Or are they comprehending an invisible layer of reality that enshrouds us all but only they, in their keen and unique frame of mind, are able to recognize and play around with.

The Man Who Only Saw the Particular

The Complex World of Jimmie

The Woman Who Lost the Use of Her Hands

The Visions of Hildegard

The Most Intriguing Set of Twins