This is perhaps my second favourite Agatha Christie mystery, after Murder on the Orient Express, and before

And Then There Were None. An ensemble of scintillating characters, each weighed down by probable reasons for committing heinous crimes, add to the mystery of this novel. They are all suspects till the very end.

I am also quite amused by how almost every Hercule Poirot thriller starts with the detective being on a vacation but then finding himself in midst of chaos and a murder or two.

One of the most compelling novels I’ve had the honor to read. Absolutely incredible! My eyes were

strained from constant reading, but I simply couldn’t tear myself away from this marvel. Sheer brilliance of storytelling is coupled with vivid characters, embossed in the ever-breathing, stringent Shaker Heights – an elitist settlement, founded and grounded upon rules and perfection.

This is a story about blindness and blunt ignorance as well as quietude and awareness of social, moral and personal issues that plague existence. Silent rebellion runs in the characters of Mia, Pearl and Izzy, and loud conformity runs in the veins of Richardson’s and other inhabitants of Shaker Heights.

Profound dilemmas make up the core of this story – shallow urbanity, racism, cosmopolitan ideals, elitism and classism, motherhood, sense of entitlement, nature of binary understanding and social mores. It is in the tackling of such sensitive issues that author Celeste Ng shows remarkable sagacity. We are always shown both sides of the coin. Yet, it is not up to the reader to be a judge for events unfurl on their own, lending insight to human nature.

Can a haunting past ever be reconciled with? And what can be done about buried, unfulfilled, unrequited ambitions? How delicate, unassuming is the line between right and wrong? Are there any absolute answers? How much can a subjective experience be transmuted to objectivity? And how much knowledge is required to enable one to have a complete understanding of human beings and their predicaments? This novel presumes to neither retain nor exude any solutions, as the prose is wonderfully simple and anti-didactic. However, it does invite the reader to ponder over such questions.

Long buried past veers into the present constantly in this story. Secrets long dead are unearthed, revived, recalled and lived through all over again. But to what end? Or is there even an end? The main story often swirls into the lives of side characters, giving more depth to the plot, but always returning to the main plot, homing into the essence of the story.

Empathy and kindness seems to be a gateway to comprehending human existence. To some characters in this story, these values come naturally. In others, it may be evoked by external events or people. In a few, however, such virtues fail to make a mark. Similarly, in the nature vs. nurture debate, the setting of Shaker Heights plays an indispensable role. Although a human creation, the colony takes a life of its own, driving its settlers on a highly-regulated pathway, dictating their lives around intangible rules, propagating hollowness in the garb of perfection and happiness. Mrs. Richardson exemplifies this best as her bitterness is negated by Mia’s organic compassion.

In all its remarkable glory, Little Fires Everywhere is one of the most phenomenal novel I’ve come across. Highly recommended!

On Classism and Opportunity

On Rules and Contrarians

An odd yet entertaining read. A geriatric black comedy revolving around aged people getting 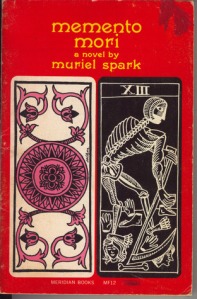 mysterious phone calls, reminding them of their inevitable death. Memories are revived, secrets are unearthed. The characters are colorful, which lend this novel an amusing thrill. Each have their own antics to live by, ranging from an overtly suspicious nature to being willfully malevolent, from being meticulous in observations of others to the point of obsession to being inconsiderate of a life partner’s sickness. Despite being bedridden, or severely arthritic, or on the verge of senility, these characters refuse to give up the last specks of control of their own lives, whether fastened to an old home or wandering freely in their own residences.

Common passions ail them all – greed for wealth, sense of entitlement, gossip mongering, revenge, jealousy. Attending funerals comes second nature to them, but so does attacking each other with walking sticks.

As a somber, somewhat lonesome widower, who had kept to himself for a long time, exposition and 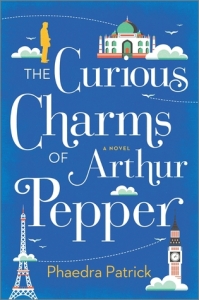 conversation sure comes to him easily which is not just unbelievable but also borders on the ridiculous. Coupled with freak coincidences which allowed Arthur to go on one adventure after the other made the story quite ludicrous. I doubt if anyone running after a burglar would suddenly indulge in remembrance of the past.

I also found the dialogues didactic and patchy in nature. No one talks about “alabaster skin” and “aquamarine eyes”, that too whilst describing a woman from the past to a complete stranger on phone. Neither does one come across a man in a restaurant who chooses to discuss his love life in order to seek advice from an elderly person.

It is one of those stories where settings, characters and plot points are deliberately installed in places only to aid the flow of the story to its logical conclusion. A myriad of characters are presented, not with an existence of their own, but only to assist Arthur Pepper with finding more about himself.

It is sloppy, careless writing. The skeletal story perhaps had potential but wanes when mere fortuities are crafted out of thin air.

A delightfully eccentric and magical story. “Mr. Penumbra’s 24-Hour Bookstore” is all about dusty

bookshelves and ancient, unread tomes and the glory of book spines and scrolls from a past not to distant. There is just the right amount of mystery and fancy, coupled with modern age technology and how both the past and future can exist in harmony and symbiosis.

On one hand, we have old knowledge buried between pages in code, written in ink. On the other we have fantastical machines, as if conjured from a future yet unborn, to decode and reserve old knowledge for posterity. Traditional knowledge might be at odds with what the present holds, but they are driven into compatibility by forces of camaraderie, loyalty and curiosity.

There is also a marvelous intertwining of different knowledge bases and career fields – software engineers, archaeologists, fantasy writers, coders and visual effect artists – that take the reader on a euphoric adventure across Google headquarters in San Francisco, to secret underground libraries and Storage Unit companies hoarding archaeological and historical artefacts.

Very rarely does one come across a story in which books and modern day tech are not pitted against each other. This is one of those magnificent reads. Highly recommended!