One adapts oneself to money much more easily than to poverty: Rousseau might have written that man was born rich and is everywhere impoverished 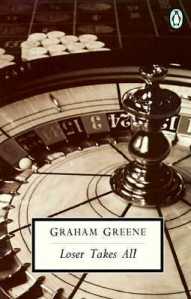 A wonderfully short and fun read, Graham Greene’s “Loser Takes All” is a first person account by Bertram, an accountant of humble means. He works in a large industrial complex and upon the insistence of his extremely intimidating boss Mr. Dreuther, he is coerced into marrying his beloved Cary in Monte Carlo instead of the modest wedding they had arranged at a local church.

Bertram and Cary travel to Monte Carlo, settle in an affluent hotel and await the arrival of Mr. Dreuther in his yacht who does not show up as promised. Days pass by and the couple’s means begin to run low until they are left with no money at all. Bertram is an avid gambler as well and through his mathematician instincts, he surmises that he may be able to win money at the Roulette tables. He begins to lose more and more money as he gets sucked into the “system”. The couple begin to squabble on Bertram’s gambling habits which become more routine as days pass by.

The room was more than empty—it was vacant. It was where somebody had been and wouldn’t be again

Cary leaves Bertram for another indigent but handsome gambler who frequents the casino. Bertram begins to win the system and comes into possession of millions. His luck takes a further leap when a shareholder of his company begs Bertram for a loan which the latter is only willing to give in exchange of the controlling shares. Bertram’s chief motivation is to seek revenge on Dreuther for the misery their boss inflicted upon them owing to broken promises. Meanwhile, Dreuther’s yacht docks at the harbour and Bertram realises that his boss had completely forgotten about their arrangement in Monte Carlo. He laments the loss of his wife and Dreuther placates him with a plan to win his wife back.

I knew about his kindness, but kindness at the skin-deep level can ruin people. Kindness has got to care

Later that night, Bertram confronts his wife with her handsome friend and pays off the latter to be rid of him. On the yacht, Bertram consoles Cary and tells her how he gave all his newly-earned money away. The couple returns to their modest beginnings with revived love and hope for the future.

I think for a moment we were both afraid to go in. Nothing inside could be as good as this, and nothing was

This novella deals with the soullessness of big business and gambling with the passion of true love and companionship. The writing style makes this a page-turner. It’s enriching and adds multiple dimensions to simply-constructed sentences without pretension. I ventured upon this book as a light-read and it did justice. It’s a gripping, thrilling story with a subject matter that wavers between the thought-provoking and the entertaining.

One thought on “Loser Takes All by Graham Greene”