“A friend is a present you give yourself.” 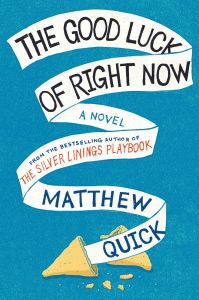 Good Luck of Right Now” is a story full of oddities but at the heart of it lies compassion and warmth. This epistolary novel doubles as an entertaining as well as a profound read on the human condition – how the most insignificant of us are blessed with a spirit of creativity and reason and in the harshest of circumstances can summon will to alter lives for better.

We don’t know anything. But we can choose how we respond to whatever comes our way. We have a choice always. Remember that!

Bartholomew Neil, our quirky protagonist, has spent thirty-eight years with his mother, tending and caring for her in sickness which ailed her towards the end. After her death, Bartholomew is left alone in an emotionally distant world. He begins to compose letters to Richard Gere, her mother’s favourite actor, believing the actor to be of some help to him. Through the course of these letters, Bartholomew tries to explain his humble situation with references to causes near and dear to Mr. Gere’s heart such as the “Free Tibet” movement.

Soon after the mother’s death, Father McNamee, an old family friend and the mother’s closest confidante moves in with Bartholomew. The priest defrocks himself and traverses on a mission to converse with God on his own. Father McNamee comes with his own emotional baggage and identity trials and soon we learn that he is bipolar. Bartholomew’s counsellor Wendy is against this co-dependency and arranges therapeutic sessions for Bartholomew with another counsellor Arnie. Wendy too, much like all the other characters, comes with her own dark story.

At these sessions, Bartholomew makes acquaintance of Max who mourns the loss of his cat Alice. He uses expletives in abundance but in a harmless and charming way. Max happens to be the brother of The Girlbrarian, a girl working at the local library with whom Bartholomew had been smitten by for the longest time but was unable to muster enough courage to talk to. This happens to be one of the many happy coincidences our protagonist identifies as a result of his mother’s death and his attempts at gathering his life together. Max and his sister Elizabeth are embroiled in their own eccentricities, believing in alien abduction and wearing amulets to ward off alien creatures.

And what is reality, if it isn’t how we feel about things? What else matters at the end of the day when we lie in bed alone with our thoughts?

Soon the four of them, Bartholomew, the priest, Max and his sister make a trip to Canada, the former duo in order to meet Bartholomew’s real father and the latter wanting to visit Cat Parliament. Bartholomew meets another tragedy and a sudden realisation of the truth whilst the two siblings are able to fulfil their own goals. Their companionship helps heal old wounds amidst all the uncertainty life throws at them.

Beyond the everyday ins and outs of our lives, there is a greater purpose—a reason

All these characters are profusely damaged and may appear “not normal”. Bartholomew and Max live in an illusory world unable to fend for themselves, Father McNamee becomes a drunkard, Wendy is subjected to domestic violence, and Elizabeth lives an elaborate lie. Amidst all this peculiarity, all the characters share a common goodness of heart which helps not only themselves in surviving this unforgiving world but also assists in forging unbreakable ties with each other. Bartholomew is eager to learn and move on with his life. Father McNamee despite his bipolarity seeks a journey towards and a defining answer from God. Not even his illness is able to sway him from his faith. Max has a massive heart and cherishes an innocent desire and Elizabeth plays along with her older brother’s idiosyncrasies.

I wanted to be with Elizabeth—just to sit next to her silently for another five minutes would have been divine. I also wanted to be by myself too, which was confusing.

The alliances these incongruous characters establish are based on mutual respect for each other’s belief’s and personalities. They are incredibly kind and resourceful, accommodating each other’s follies and whims without a second thought. This is why Bartholomew lets the priest stay over and even offers his house as a refuge for Wendy. This ties up with the ending in which Bartholomew extends the invitation to the two siblings who had been evicted prior to their journey to Canada.

Your appearing to me is just another koan, something to ponder deeply but never answer or solve. The universe hiccups, and we poor fools try to figure out why

The epistolary nature of the story lends it a dream-like quality. Bartholomew maintains one-sided communication with Richard Gere the actor, believing him to be reading his dispatches and offering assistance by appearing in front of Bartholomew whenever he is in trouble or is unable to form his own view of a social situation. References to the Dalai Lama and Buddhist concepts of kindness and altruism help Bartholomew create his own world view.

With humanity and gentleness at the very core of this story, “The Good Luck of Right Now” evokes feelings of tranquillity amidst the chaos of this world. For many readers, it can even be inspiring in terms of making sense of the disorder. The adage “good luck of right now” more or less can be held similar to “everything happens for a reason”. The Mother’s death snowballs Bartholomew’s life in a series of wonderful and sometimes unfortunate chance occurrences which ultimately enable him to get on with his life despite his autistic condition.

You cannot beat time; you can only enjoy it whenever possible, as it zooms by endlessly.

This is a highly recommended read for anyone seeking a light-hearted and cheery inspiration. It was an honour and absolute delight to know these remarkable characters.