“One thing must be understood: I have said nothing extraordinary or even surprising. What is extraordinary begins at the moment I stop. But I am no longer able to speak of it.”

This is an utterly moving and beautiful memoir, chronicling the author’s meditations on his 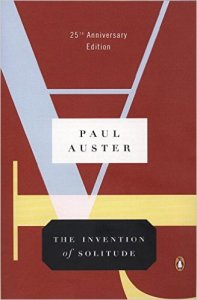 father’s death, happy coincidences and driving forces of his own life which give meaning to his existence. Split in two, the first part of this book deals with the author straining to give a definite form to his father through memories. Auster wants to embody the vague image of his father, a complicated and lonely man, in concrete terms in order to resolve his unanswered question of what his father meant to him.

At times I have the feeling that I am writing about three or four different men, each one distinct, each one a contradiction of all the others.

The second part deals with Auster’s reflections on his own life, a myriad of chance occasions that have propelled his life in a certain direction. He ruminates over his own identity as a father to his son Daniel and draws parallels from his younger self to his older self as a human, a husband and a father. In urgency of recollection, Auster becomes a man of solitude much like his absent father. This is an incredibly insightful look into the author’s life in which he uses wealth of words and memories to refine the process of introspection.

As if he were going both forward and backward, into the future and into the past. And there are times, often there are times, when these feelings are so strong that his life no longer seems to dwell in the present.

Portrait of an Invisible Man

In the deepest, most unalterable sense, he was an invisible man. Invisible to others, and most likely invisible to himself as well

Auster begins the book by reflecting on his recently deceased father’s life. Sam Auster had always been an emotionally distant father to Paul and his sister. After separating from his wife, he lived an increasingly solitary life, absent from his children’s lives though investing some time with his grandchildren. He was a man of mercenary ambitions owing to privations he had lived through as a child. His fear of poverty was the one driving and motivating factor of his life. The writer begins to unveil his father’s flawed character through some incidents he experienced as a child and then later on as a young adult. A young boy always seeks his dad’s approval in all his endeavours and on most accounts Sam faltered as a father.

Like the house that was well ordered and yet falling apart from within, the man himself was calm, almost supernatural in his imperturbability, and yet prey to a roiling, unstoppable force of fury within

One of the most defining factors of Sam’s life as a lonely man is found in the house he inhabits. Paul brings to life the abode of his father, drawing countless parallels to his father’s psyche and to his residence. The house was to be sold in a few weeks but Sam’s untimely death intervened. Paul brings his wife and son along to clean the house and stumbles upon a past mystery which tends to explain his father’s absence as well as his childhood.

He uncovers the mystery of his grandfather and in the process he is able to reconcile with his father’s image as an untiring man, fearful of destitution and scrambling to hide a warm and kind heart. His father’s vulnerability was shrouded in deliberate absence interspersed with moments of familiarity.

It was negligence that governed him, not memory, and even though he went on living in that house all those years, he lived in it as a stranger might have

The writer also aims to discover the form of solitude his father had embodied throughout his life. This conscious loneliness also manifested itself in the author’s life and in trying to decipher his father, Paul undergoes the process of self-realisation. This is further commented upon in second part of the book.

Paul vividly describes his father’s character without reference to any distinct trait. In my mind’s eye I was able to wholly consolidate Sam as a living, breathing human being – a man who had lived through a childhood tragedy, had fathered two children with considerable taciturnity and had resolved himself within the small space he occupied. One marvels at the author’s impeccably brilliant description of his father’s solitude without making the reader pity him.

In retrospect, nothing could have been more trivial. And yet the fact that I had been included, that my father had casually asked me to share his boredom with him nearly crushed me with happiness.

After all, Paul isn’t seeking our sympathy. He is merely acknowledging the existence of a father figure, his reticence and compassion, and in doing so, the author is finding more of himself as a man and a father to his young son Daniel. The beauty of the prose lies in one of many such instances where Auster whirls the reader into his personal life, showing just enough for the reader to grapple Sam’s circumstances and leaving the rest on natural empathy so that the reader may concoct their own image of Sam Auster.

He did not seem to be a man occupying space, but rather a block of impenetrable space in the form of a man. The world bounced off him, shattered against him, at times adhered to him—but it never got through

Another aspect of story-telling which give this a deeply intimate feel is Paul’s personal interludes. Amidst narrating a somber incident, he takes a break and allows his self to intervene, complimenting the difficulty of the writing process with summoning memories which are haunting. He reveals confusions associated with writing about his father’s death, the perils his own identity faces and infuses it with obstacles of writing in order to overcome them. A particularly favourite passage of mine is:

Nothing now for several days… In spite of the excuses I have made for myself, I understand what is happening. The closer I come to the end of what I am able to say, the more reluctant I am to say anything. I want to postpone the moment of ending, and in this way delude myself into thinking that I have only just begun, that the better part of my story still lies ahead. No matter how useless these words might seem to be, they have nevertheless stood between me and a silence that continues to terrify me. When I step into this silence, it will mean that my father has vanished forever.

These interludes lend a more “human” quality to these intensely personal memoirs. Given that this was Paul’s debut work, I am mesmerised by his audacity to lay bare the most private of thoughts, many of which are cloistered within the deepest recesses of our mind.

The Book of Memory

These tiniest of images: incorrigible, lodged in the mud of memory, neither buried nor wholly retrievable. And yet each one, in itself, a fleeting resurrection, a moment otherwise lost

Second part of the book reads more like short essays, expounding on the nature of coincidence, the overarching theme of father-son relationship, the eternally prevalent question on notion of time and its passage, the present in reference to past, the significant journey from infancy to adulthood and on traversing through one’s memories to form one’s identity.

This reluctance, he began to realize, was a product of fear. But fear of what? Of walking back into his own past? Of discovering a present that would contradict the past, and thus alter it, which in turn would destroy the memory of the past he wanted to preserve?

The Book of Memory is further divided into thirteen books. In each book, the author touches upon one subject from his life, alluding to himself as A. and a myriad of other characters with only single-letter initials. He recounts his life in Paris as a struggling poet and translator, a father of an ailing son undergoing divorce, a son to his now deceased father as well as a son and friend to another well-wisher whose death brings back memories of his dad.

More than an emanation of his mind. He feels himself sliding through events, hovering like a ghost around his own presence, as if he were living somewhere to the side of himself—not really here, but not anywhere else either

The author refers to himself in third person which amplifies his quest for introspection. Seeing himself as A. and not as “I” or “me”, Paul is able to delve deeper into his incessant need for being present in the now as well as the past. He aims to reunite his personal history with factors that led to his current circumstances. This further leads to recollection of chance happenings that have strung his life and identity together. Paul refers to this as the “rhythm of life”.

A young man rents a room in Paris and then discovers that his father had hid out in this same room during the war. If these two events were to be considered separately, there would be little to say about either one of them. The rhyme they create when looked at together alters the reality of each…It is only at those rare moments when one happens to glimpse a rhyme in the world that the mind can leap out of itself and serve as a bridge for things across time and space, across seeing and memory

Memory in both senses of the word: as a catalyst for remembering his own life and as an artificial structure for ordering the historical past

This was an utterly refreshing, sad but poignant read. It is a memoir devoid of extraneous self-indulgence, something I felt terribly with Joan Didion’s “The Year of Magical Thinking”. Meditations on death need not be superfluous nor be embellished with fanciful attributes. Similarly, mourning the dead as Auster does is more about assembling broken connections and trying to make sense of a tragedy rather than belittling it as a mere misfortune of grand proportions. In reuniting with his father’s image, Auster discovers more about himself than he would have had, had he nourished a bygone grudge.

“The Invention of Solitude” rejoices in life and its most trivial aspects amidst loss and bereavement. It beckons the reader to embrace the oddity of life. Paul Auster’s self-analysis is brutally honest without any grandiose statements. Choppy sentences, exquisite character detail, reference to himself in third person are all used adeptly for this memoir to be deeply personal yet inviting and engaging. It is sublime and poetic. A highly recommended read!

For it is only in the darkness of solitude that the work of memory begins.

On Passage of Time

One thought on “The Invention of Solitude by Paul Auster”