Out of all the intriguing concepts I came across whilst doing the course “Decision Making in a Complex and Uncertain World” on FutureLearn, the ones that most caught my eye were those which I could personally and individually relate to, from my own view point. They were namely cognitive biases, elephant paths, the difference between fragility and crisis (and determinism), lock-ins, tipping point, collective group behaviour being independent of individual behaviour, and so on and so forth.

The course started with a hyperbolic ideal that even then I thought of as an overstated goal – that the course would assist me in decision making. Perhaps the ideal was set for those involved in the business world, the innovators, the leaders, the entrepreneurs and such. But for me personally, I’m still struggling how to incorporate that which I’ve learned to my daily decision making. What I have been able to do, however, is to relate the aforementioned concepts to my surroundings enabling me to understand the nature of complexity around us, the byzantine, intricate details of life and its events that hide in plain sight.

As I see it, complexity and simplicity are interdependent. Neither can be made sense of without the other. Such as the concept of “elephant paths” which I will discuss later. For now, the context of the course is a clear example. The instructors of the course helped a novice like me grasp the complicated concepts of social economics by presenting them in a comprehensible manner. For this, they relied on simple terms and definitions. Hence, simplicity paved way for the complicated. In a reversal of situation, the complication that exists relied on humans for it to be understood, defined and simplified.

Another example is that of “elephant paths”. While taking a walk in the park, we often notice a track bared of all grass leading from one point to another, often as a shortcut from, say, Point A to Point B, while the normal walking pavement also goes from Point A to Point B albeit covering a longer distance. This concept is roughly known as “displacement” in Physics, but “elephant paths” in Social Economics. What is most interesting is that when we delve deeper into the psychology of why people chose to adopt a new path instead of an old, traditional one, we come across terms such as an “anarchist”. Broadly speaking, it is an anarchists way of traveling around a particular area. But what about circumstance? In what circumstances, other than saving time and energy, does one adopt an irregular route?

One lively example that comes to mind is that of hiking tracks being evident of the adventurous spirit of a sole human being who ventured into the unknown, being the first of his kind, opting for a means to climb the hill. Unknown to him and thousands of those who may follow in the future, he is actually tracing a path in a new region. But of course, this is all very idealistic. Many hiking trails nowadays are in fact paved by local authorities. How about animals grazing over a certain path over a long time period? Say on the same hill that a tourist, many years later, finds a half barren, narrow track leading all the way to the top. And there a tradition, a norm of sorts begins where all the hikers adopt the same path to climb the hill. They are conformists and tend to organize themselves under that norm, albeit unknowingly.

Elephant paths are also known as Desire Lines, which in my opinion is a very fascinating phrase underlying our deepest desires attributed to our actions. They may reveal something of our social interaction with people and the nature around us. Or the subtleties of our subconscious behind that fleeting moment in which one decides to take the elephant path because it is associated with a particular memory. 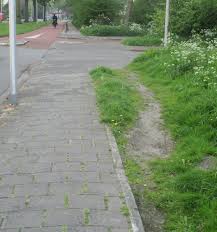 criteria for its formation. After all how much time can one save by walking on the seemingly shorter path than on the paved track? There isn’t a considerable difference in their distance from one point to another. That rules out the element of conserving time and energy. No animals could’ve grazed the path since it seems to be located in an urban area. There isn’t a plausible explanation as to why this desire path might have been formed. Perhaps it’s deliberately created by local authorities, to add an aesthetic appeal, but of course this doesn’t seem too rational. Or maybe, for a time being, the pavement was under construction or repair of some kind and passer-by’s were forced to seek an alternate route through the grassland. As is the case with cars finding shortcuts in situations where a road is blocked. I certainly was witness to this marvellous phenomenon in my own city of Islamabad when half the city’s roads were blocked by containers – I just didn’t know it had both social and psychological implications, and a term!

Another interesting concept that I came across was that of Cognitive Bias, which is simply defined as the tendency to think in a particular way. Here is a definitive list of cognitive biases. During the course, we were asked to pick which biases we were most susceptible to. To this question I added another “which biases I could relate to in my immediate surroundings as well as in me?” Here’s a list of those which I was able to identify personally:

If one reads the list in entirety, one can associate almost all the biases with oneself in one way or another, in varying degrees. You also notice that if a Venn diagram was to be made to illustrate these biases, they would all overlap one another, which would result in a very messy figure. I’ve experienced the hot-hand fallacy, assuming that someone from a wealthier family who was successful in their first attempt at an exam, was given a go-to pass to succeed in all attempts in the future. This overlaps the Illusion of control bias, because given that I believe in his success in all future tests, I’m attempting to control that which is improbable and uncertain.

I’ve also experienced the egocentric bias (recalling the past in a self-serving manner) which is a type of memory bias. Upon visiting my aunt’s house after a good fifteen, sixteen years, I was astounded by the fact that the rooms appeared to be a lot smaller than my memory had afforded them to be. To my recollection, the rooms were always huge, spacious, airy like the rooms in a haveli. But my memory had faltered. Since nostalgia (a self-serving process of mind) plays a huge role in warping our dearest memories, I had begun to think of the house as an ancient chalet. Turns out the rooms had always been of a moderate size. Another room was rather too shabby, much to my disappointment. Or was it that when I was last in them as a small child of nine years, my relative size to that of the room had left the imprint of rooms being huge on my memory. I had grown now, but the walls remained the same, and so did the memory.

Or how about the decoy effect, which I experienced while selecting carpets. Out of sample A and B I preferred sample A, but when sample C (same quality as sample B) was shown, I immediately went for sample B. Had the shopkeeper not shown sample C, would I have stuck to my decision of selecting A? How did the third option alter my final decision? I think this phenomenon works on the same principle as “less is more”. It is easier to make a choice between two, rather than three. Another example of this is television. In the good, old 90’s, we used to get three channels at home. It was easier to stick to one channel, watch entire series of dramas that spanned months, and concentrating on news. Now whenever you inquire of someone as to what they are doing, more than often their reply would be “just sitting in front of the TV, shuffling channels.” Shuffling channels was something of a non-existent phrase back in the day. The limited choice enabled more concentration as opposed to the short attention span each channel receives in terms of viewing now that we get up to a hundred channels at the click of a button. I believe the same goes for “surfing the web”, and the model behind social networks. I’ve made a mental note to observe next time how many articles a shopkeeper displays in front of me upon demand. I wonder if knowing and having identified what this phenomenon is will help me in making a better decision next time? Only time can tell.

4 thoughts on “of Paths and Biases”